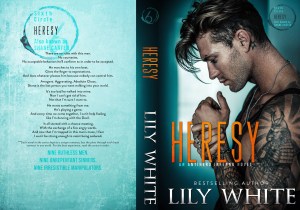 There are no rules with this man.

No acceptable behaviors he’ll conform to in order to be accepted.

He marches to his own beat.

Gives the finger to expectations.

And does whatever pleases him because nobody can control him.

Shane is the last person you want walking into your world.

It’s too bad he walked into mine.

Now I can’t get rid of him.

Not that I’m sure I want to.

He wants something from me.

And every time we come together, I can’t help feeling like I’m dancing with the Devil.

It all started with a chance meeting.

With the exchange of a few angry words.

And now that I’m trapped in this man’s maze, I fear I won’t be strong enough to resist being seduced.

*** Each novel in the series depicts a unique romance, but the plots through each book connect in one world. For the best experience, read the series in order.

Lily White is a bestselling author who likes to dabble on the dark side of romance. She is most known for her Masters Series, Target This, Wishing Well, and The Five.

When she isn’t writing as Lily White you can find other books by her under M.S. Willis where she has penned the Control Series, the Estate Series, and Because of Ellison (contemporary romance).

Lily enjoys stretching her writing muscles by continuing to challenge herself with each book she publishes.