We’re celebrating the release of Tanner: A Sexton Brothers Novel by Jeannine Colette and Lauren Runow! One-Click Tanner today and binge on the Sexton Brothers all weekend!

Book Description
“A kiss was all I needed.”

“Yes. About that…”I was supposed to find a finely dressed businessman, have a one-night stand and forget about my failed relationship. Instead, I meet Tanner Sexton—a gorgeous man in street clothes, messy hair and the sexiest smile I’ve ever seen.

When my ex shows up at the bar, Tanner notices my panic and kisses me just so the prick can see. Then he takes off, leaving me breathless.

So, I do what any rational person would. I chase after him onto the subway, and embark on a wild night in New York City with a complete stranger.

No matter how much I fight it, this mysterious artist painted his soul onto my skin, and I haven’t been able to forget him. Our romance is one for the ages, but age isn’t the only thing standing in our way.

Catch up on the series here! 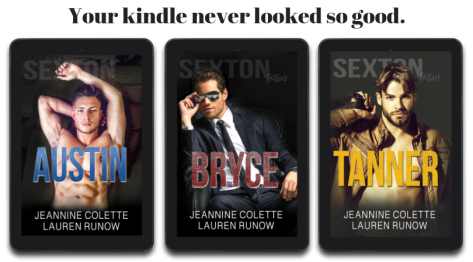 Lauren Runow is the author of multiple Adult Contemporary Romance novels, some more dirty than others. When Lauren isn’t writing, you’ll find her listening to music, at her local CrossFit, reading, or at the baseball field with her boys. Her only vice is coffee, and she swears it makes her a better mom!

Lauren is a graduate from the Academy of Art in San Francisco and is the founder and co-owner of the community magazine she and her husband publish. She lives in Northern California with her husband and two sons.

Jeannine Colette is the author of the Abandon Collection – a series of stand-alone novels featuring dynamic heroines who have to abandon their reality in order to discover themselves . . . and love along the way. Each book features a new couple, exciting new city and a rose of a different color.

A graduate of Wagner College and the New York Film Academy, Jeannine went on to become a Segment Producer for television shows on CBS and NBC. She left the television industry to focus on her children and pursue a full-time writing career. She lives in New York with her husband, the three tiny people she adores more than life itself, and a rescue pup named Wrigley.

Jeannine and her family are active supporters of The March of Dimes and Strivright The Auditory-Oral School of New York.

First, I have to say that all of these books can be read as a stand alone!

I have been waiting, rather impatiently, for Tanner’s book and what a moving story it was!

This is Tanner & Harper’s story.  There are so many reasons why I absolutely loved this story.  First is the age twist, I admired this, I embraced it!

Second, Tanner….oh my me, this man has a way with words.  He is an artist with an old soul. The things he says to Harper will make you melt into a swoon puddle and will need a ice cold blast of his father and stepmother to make you whole. The way he thinks, the way he moves, hell the way he just IS…it’s art personified and that is a true testament to the writing skills of Ms. Colette and Ms. Runow.

Harper is a down to earth, rule follower.  She is nursing some serious hurt and needs to escape reality.  She finds her escape in Tanner.  Even when she has doubts, worries and just is plain old scared, Tanner makes magic and makes her believe in herself again.

Last but certainly not least was the lovely view at past characters, not so much to override the main story, but just enough to see what has become of them.

This was an amazing story, Tanner’s words will stay with me for a long, long time!!